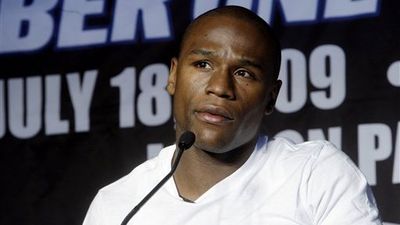 Mark March 13 on your calendar. That’s the proposed date for a megafight between Manny Pacquiao and Floyd Mayweather Jr.

It’s not a done deal, but it’s so close, Michael Buffer is warming up his vocal chords and practicing his introductions.

For the thousands in attendance and the millions watching around the world, may the best man win.

Ladies and gentleman, let’s get ready to rum-blllle.

After years of thinking what could be, the fight everyone wants to see looks like it’s finally going to be. And this is the fight that actually might live up to the hype -- for many reasons.

Pitting the best against the best is a recipe for success in any field. On the biggest boxing stage, it is glory on a silver platter.

Mayweather and Pacquiao are the most skilled fighters on the planet.

Boxing needs a rebirth. Not since the days of the 1980s -- when Tommy "Hit Man" Hearns, "Marvelous" Marvin Hagler, "Sugar" Ray Leonard and Roberto "Hands of Stone" Duran fought among themselves nine times -- have there been any great, long-lasting, epic rivalries in boxing.

The trilogy. Two to three years of sustained excellence with a couple of Hall of Fame warriors in the ring. Imagine that. Boxing would be back and better than ever.

Oddsmakers already have cast Mayweather as the slight early favorite, but Pacquiao might be the only person who can humble him, and that would be a sight to behold.

Even if you’re not a fan of the sweet science, two months of Mayweather and Pacquiao on HBO’s 24/7 would be first-class entertainment. The show has been a stroke of marketing genius, as responsible for helping bring boxing out of the shadows as the fighters themselves.

But there’s still room to grow, and Mayweather-Pacquiao would be the culmination of a long journey back to respectability.

Christmas has come early for sports fans. If you can’t afford to get to Las Vegas, Dallas or New Orleans to see this fight in person, put away at least $54.99 for the pay-per-view ticket.

Mayweather-Pacquiao will be worth every penny.

Get paid to share your links!
Homepage Site map RSS Print
This website was built with Webnode
You can also have an impressive website for free!
Try it out